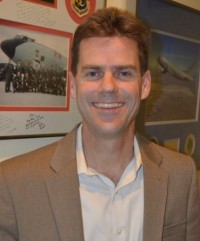 Steve Brandt is a 1990 Graduate of the United States Air Force Academy, a Graduate of the United States Navy Test Pilot School, and a retired Air Force Lieutenant Colonel. A former Instructor Pilot for the DoD, Steve has experience in flying 30+ aircraft types, instructor pilot experience in 6 different aircraft and over 2800 flight hours, primarily in single seat fighters. Additionally, Steve holds an Airline Transport Pilot rating and a Boeing 747 type rating, having flight tested the Airborne Laser 747 aircraft. Steve earned his MS in Engineering Physics from the University of Texas, and taught aeronautics and flight test at the United States Air Force Academy. Steve concluded his Air Force career as a flight and academic instructor at the United States Navy Test Pilot School, and also taught there as the chief instructor of the aircraft performance branch where he was selected as Instructor of the Year in 2014. Steve transitioned out of the government to begin his own business, BARIT Services, LLC, providing technical and flight support in the UAS research and development arena. He currently leads UAS research in the Department of Aeronautics at the Air Force Academy and provides flight test consulting support to other DoD and commercial agencies. Steve is a senior member of the Society of Experimental Test Pilots and resides in Colorado Springs, CO.

Which Introductory or Advanced course is right for you? Anyone looking for a “big picture” … END_OF_DOCUMENT_TOKEN_TO_BE_REPLACED