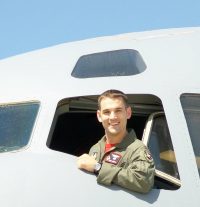 Mr. Mark Jones Jr. is a husband, father, experimental test pilot, and mathematician. He is a 1999 Distinguished Graduate from the United States Air Force Academy and an East West Fellow from 1999-2000 at the University of Hawaii. Mark flew the C-17A Globemaster III in Operations Enduring Freedom and Iraqi Freedom, and he currently flies Remotely Piloted Aircraft for the Air Force Reserve. He was the Outstanding Graduate in Mathematics and received his master’s degree from the University of Charleston in 2006. In 2008 he graduated from the United States Air Force Test Pilot School with a master’s degree in Flight Test Engineering.

As a civilian Mark consulted for the Department of Defense and various aircraft manufacturers from all over the world. He continues to consult as a Designated Engineering Representative, Flight Test Pilot for the Federal Aviation Administration, and he currently serves on the editorial review board for the FAA’s Unmanned Aircraft Operations Handbook. Mark has experience in flying more than 30 kinds of aircraft and holds Airline Transport Pilot and Multi-Engine Instructor certificates. Mark has taught courses as an adjunct faculty, a military instructor pilot, and an experimental test pilot. He is an associate fellow of the Society of Experimental Test Pilots, and a member of the Vertical Flight Society eVTOL Flight Test Committee, AIAA, the Flight Test Safety Committee, and the Society of Flight Test Engineers.

Which Introductory or Advanced course is right for you? Anyone looking for a “big picture” … END_OF_DOCUMENT_TOKEN_TO_BE_REPLACED